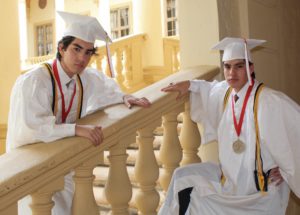 In 2015, the Gonzalez Salinas twins, Braulio and Renato, emigrated from Peru to Miami, FL with their parents and sister. They knew that living in the “land of opportunity” required them to adapt to the US system, learn the language, and navigate a new academic system that was foreign to them in every way.

Prior to registering to attend Coral Gables Senior High, Braulio and Renato had finished taking their middle school’s English for Speakers of Other Languages (ESOL) classes to learn English and achieve their new academic goals. They began their high school career by joining the school’s International Baccalaureate (IB) program, a prestigious and rigorous academic program aimed at challenging students to excel in their studies.

Once the brothers started their second year at Gables High, they became aware of the knowledge gap that existed between the school’s students and immigrant students who did not speak the language. Braulio and Renato discovered that ESOL students did not participate in many extracurricular activities as compared to native English speaking students. Joined by their sister Paula, they set out to bridge that gap.

“We didn’t want students who did not speak English to miss out on the many school activities and extracurricular programs due to the language gap, so along with our sister we created ‘Gables Flags,’ a multicultural group that aimed to teach its members about the variety of cultures represented by the student body. Gables Flags set out to prove that while we all may speak different languages and come from different cultural backgrounds, we are not very different after all,” said Braulio.

In 2018, Braulio and Renato became aware of AEA Miami, and its mission to support orphan and youth homes in the highlands of Ayacucho, Peru. AEA’s mission hit home for the siblings, because they had visited Ayacucho in the past, and could attest to the city’s poverty crisis.

When AEA Miami asked them if they would help its mission, the brothers immediately called on members of Gables Flags and organized a large group of student volunteers to support AEA’s annual fundraiser galas. Gables Flags students helped set up the gala, including the gala’s silent auction.

In 2019, Braulio and Renato nominated AEA Miami to be a recipient of the IB Honor Society’s Bridge 4 Peace philanthropic event that raises money for causes that help people in need. AEA Miami was selected (read about it from the school’s website here) and in June 2020, AEA Miami received a check for $10,223.14.

Today, after graduating top of their class, Braulio as valedictorian and Renato as salutatorian, they are college-bound to the University of Pennsylvania’s Wharton School where they will study Management in Healthcare Policy and International Studies, respectively.

AEA Miami is grateful for Braulio and Renato’s support and commitment to our mission. They deserve our gratitude and admiration for showing that through perseverance, discipline and a desire to make a difference, they can make the world a better place.